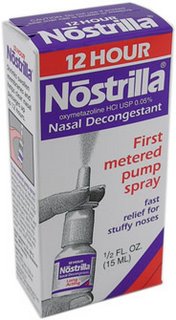 I have a confession to make. Although I was blessed with a big honker, it’s frequently stopped up due to allergies and/or seasonal dryness. It makes sleeping a restless chore, as anyone who’s had the sweet/sour opportunity to spend the night with me could attest. Of course the sinus problems would be bad enough, but now I’m coming out of the closet to admit that… I’ve become addicted to nasal spray. Yes, I know it’s shameful. I feel like I’m letting each and every one of you down and I know this admission could possibly keep me out of the Hall of Fame. But maybe all it takes is for one brave voice to speak out. One fearless soul to stand up and say, “Stop the madness.” Actually, that Nostrilla shit is pretty fuckin’ good — but NO! That’s just an addict speaking!!! According to “experts” if you use the junk for over a week, you risk making sinus inflamation even worse that when you started…which makes you use more and more of the decongestant…and it works…only less and less effectively with each passing day until you’re huffing it down every couple of hours. I’m trying to wean myself off that sweet, sweet stuff with saline nasal spray. Let me just say, it’s a little like giving a smoker one of those fake smokeless cigarettes that existed for about two minutes in the ’80s. Saline spray tastes like I’m putting finger paste up my nose and is probably just as effective. Now I sound like Jonathan Richman and feel all grumpy. Get out my way!

1 thought on “Addicted to Breathing”