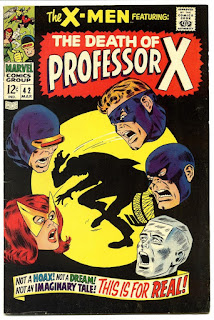 I started collecting comic books in earnest back in 1982. I was always interested in reading them and kept a few issues of Batman or Spider-Man under the bed — usually with coupons clipped or covers torn off. A friend named Jeff Sternal turned me on to the idea that comics could actually be of some worth if properly handled — which involved buying plastic bags and acid-free storage boxes. I started attending comic conventions and referring to price guides and dreamed of owning rare issues. I got into the X-Men — that was MY book — and bought as many back issues as I could. With the dawning of eBay in the late ’90s and the addition of extra capital on my part, I once again dove into collecting, filling holes in my collection with those issues that I used to only dream about, but could now pull up on the internet with a few clicks of a button. People ask me what is the appeal of comics. I say that comics are a portal into another world, another time. A world where two inch soles added to your shoes would make you more attractive to women and where X-ray specs would allow you to see through their clothes. Oh yeah, and there were the superheroes — stand-ins for the hapless, youthful readers. Stand-ins who wielded the power to right the wrongs even though, as in the case of the X-Men and Spider-man, they were often misunderstood and hounded by authority. As the years have passed, I still understand the draw of comic books but I no longer feel its power. To that end, I’ve decided to divest myself of my entire collection. I’m putting my best up on eBay individually. It makes me a little sad to see them go, but at the same time I’m also actually having one last hurrah with them, scanning their images into my computer and looking them over for defects to report to potential collectors.