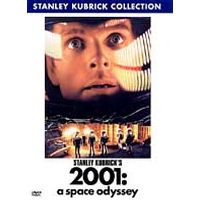 The 16:9 widescreen TV revolution has forced me to come to terms with the often misunderstood topic of DVD aspect ratios. It turns out some of the disks in my collection — including “2001: A Space Odyssey” — are now almost unwatchable, thanks to obsolete video technology that is still being practiced by some manufacturers and studios. Knowing the difference between an anamorphically enhanced DVD and a DVD presented in a simple widescreen format could be the difference between watching a movie and experiencing it — especially on a flat-paneled TV.
First, a little primer: One of the first things to understand is the actual concept of aspect ratio itself. Aspect ratio refers to the ratio of the screen’s width to its height. So a common cathode ray (CRT) tube television set, with its squarish screen, actually has an aspect ratio of 4 wide to 3 high, or 4:3. Since

television screens are various sizes, the 4 and the 3 don’t necessarily represent any one number of measurement. Most films made before 1953 were meant to be seen in the 4:3 format (also known as 1.33:1). With the advent of TV, Hollywood sought to lure viewers with something CRTs couldn’t deliver — a panoramic picture. Thus, the birth of widescreen in all its many flavors — Cinerama, Cinemascope, Todd-AO, SuperPanavision, et al. The new format expanded the image ratio from 1.33 to 1 to up to 2.58 to 1 (in the case of classic Cinerama). Thanks to an anamorphic optical process utilizing special lenses, the photographed image was squeezed onto frames of 35mm and 70mm celluloid, resulting in a distorted, elongated image that was “decompressed” by another lens when projected, whic 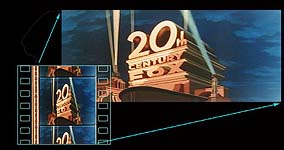 h actually distorted the image yet again, stretching the picture to fill the new, wider screens in movie theaters. With the anamorphic system, filmmakers could use up the entire frame of film, preserving much more detail than if black bars or letterboxing had been used in the frame. Viewers might remember seeing old movies on television where the actors and buildings appeared elongated and distorted during the opening credits — this was the uncompressed anamorphic image, usually broadcast to display the full credits without cropping.
Which brings us to the new flat screen televisions. These high definition-capable screens are formated in what is termed 16:9 — in other words 16 wide by 9 high. The ratio is also sometimes expressed as 1.78:1. Quite a change from the old 4:3 television screen. Note that most modern films are presented in an aspect ratio of 1.85:1, but thanks to the capabilities of digital technology, an aspect ratio of 1.85:1 can be “stretched” out to fill a widescreen TV panel with no black “letterbox” bars.
A lot of the widescreen DVDs manufactured before 2000 look like complete doo doo on new LCD and plasma screens. Why? Before digitally, anamorphically enhanced 16:9 DVD transfers, most companies manufactured their disks for use on 4:3 television screens — along with

those harsh black bars on the top and bottom of the screen built in to the picture — much in the way that older moviemakers did to create a widescreen picture before the introduction of anamorphic photography. While this looks perfectly acceptable on older sets, there is simply no way to stretch the picture to a 16:9 aspect ratio without creating severe distortion which some people apparently don’t mind, judging from the “HD” broadcast quality of several local television stations here in Dallas which pull a 4:3 picture all the way across a widescreen, resulting in short, fat actors and squished sets.

Thankfully, many older DVDs, such as “2001” have been remastered in “enhanced for widescreen television” editions. And while the studios could be accused of double-dipping (they wouldn’t ever do anything like that, would they??), it’s hard to find too much fault since they’ve

been rather forward looking on this issue for the past six years, producing anamorphic DVDs for a market that is only now being tapped into. Remember, always check the aspect ratio on the back of any DVD you’re interested in and always look for “enhanced for 16:9 TVs”, keep in mind that that cheap “bargain” you may find on eBay could be an old non-enhanced version of disk that will never play properly on your new LCD TV and finally, don’t be alarmed if you still see black bars on certain films like “Star Wars,” which features an aspect ratio of 2.35:1. There’s no way of fitting the entire frame onto your screen without some cropping on the sides.

For (lots) more information on the history of widescreen cineman, check out the excellent Widescreen Museum website.
And this guy does a much better job at explaining the technical side of widescreen DVDs than I ever could.
Here’s a really good site with pictures.