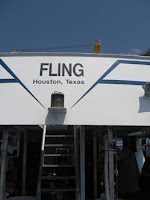 After meeting Gordon Gibson at his Cedar Hill home on Friday morning, we made our way to Austin to pick up Layne Hedrick, a diving veteran and instructor with many Flower Garden trips under his belt. Layne was also certifying me for nitrox on this trip.

We drove into East Texas and down to Freeport, a sleepy village located on the muddy port channels south of Houston. As darkness settled in, we were finally allowed onto the MV Fling, the 100 foot liveaboard that was taking us to our destination. There was over 30 divers on this trip — a full house. The Fling is a big boat but it’s no ship. Finding space for yourself and your equipment — not to mention a prime bunk — wasn’t easy. Harder still was dealing with the constant pitching and lurching of the vessel on the 3 to 4 foot waves, a fact I had come prepared for. Taking a dose of Dramamine an hour before boarding prevented any sea sickness (although I came close to losing it the first night in my bunk). Others on the boat weren’t as sensible. One young lady spent the entire two day trip crawling on the floor, hurling her guts out (we were actually given Hefty garbage bags on the first night — this pitiful chick used them all).

Our first dive took place at 7 am on Saturday morning. The Fling had powered all night into the Gulf, anchoring at the 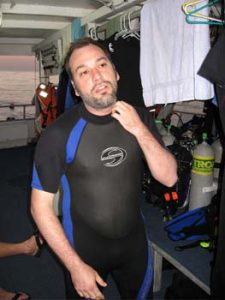 West Bank of the Flower Gardens. Anyone’s who’s ever spent

time along the Texas coast would be amazed at how blue the Gulf of Mexico can be 100 miles from shore. After donning my wetsuit and gear I made the 5 ft giant stride through the ship’s gunwale, plummeting into the brine. The water was around 77˚F. After catching my breath we made our way swiftly (probably too swiftly for my tastes) to the downward line and pulled ourselves in deeper and deeper. I was nervous — this was my first saltwater dive — but my fears were completely unfounded. We descended on

to a coral reef that stretched as far a the eye could see (visibility was around 80-100 ft). Varieties of fish swarmed around, I’m talking “Finding Nemo”-type fish, included huge bluejack and one of the biggest grouper I’ve ever seen — it must have been around 200 pounds! The very first dive of the day was restricted to 130 feet with successive dives limited to 100 ft. but none of that really mattered since most everything you’d want to see was at around 70 ft underwater. The coral colors were hard to make out in the morning (lack of) light but the sea’s blue hue wrapped everything up in a big, wet hug. 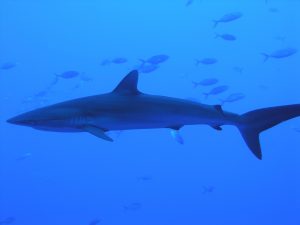 The second dive was Gordon and myself alone. We made our way until we lost sight of the anchor line and the other divers. I started to run low on gas. We were lost. I wasn’t afraid that we would die, I was afraid we’d be banned from diving the rest of the trip (stuff like that happens to stupid divers). After executing a textbook safety stop at 15 feet in open water, we surfaced about 300 yards from the boat. After getting the divemaster’s attention, we were picked up unceremoniously in a small dingy accompanied by the catcalls of the other divers. We coulda kicked to the boat, I tell ya, but I guess we did the right thing.

The next dive was under a gas rig near the East Bank. After our debacle on the West Bank, I

was happy to see that there was no real way to get lost under the giant metal legs of this sea rig. What was really cool was the abundance of wildlife — dozens of silky sharks, hundreds of bluejack, gigantic sea turtles munching on sponge. Our steel 95 tanks allowed Gordon and I to stay in the water longer than the other divers. Something feels very spooky when you’re the only one in the water. Those barracuda suddenly look a lot more menacing.

The nearby East Bank offered the day’s final two dives. Schools of trigger fish and huge barracuda ringed the depth. I found my way to a patch of flat rock (thought it was sand, ended up cutting my knees) and crawled around, looking under the coral. The powerful ocean surge would pull me at first into and then away from the coral tops. It was sorta fun once I figured out how to use it but was a little frustrating at first.

The last dive of the day was a night dive at the same buoy. Unfortunately my light canister, after working all day to 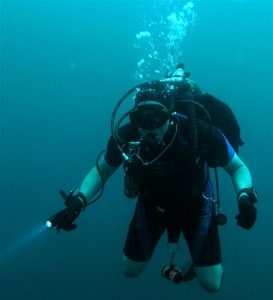 little effect, stopped working at all at dusk. I grabbed Gordon’s spare C8 pistol-grip light and attached it to my harness. When I made the giant stride into the ocean,

however, the plastic grip-ties that held the light to its clip, busted and sent the light plummeting to the bottom of the ocean. Confused, frustrated but undeterred, I did a pike dive and sent myself into the blackness. I turned the light on before I jumped in so I could see it shining at the bottom at around 70 ft. When I arrived it was lying next to a strange, prehistoric-looking crab. The darkness provided a suitably eerie ambiance. Fellow divers’ light beams cut into the inky blackness but never all the way through. At certain points, the water completely disappeared, leaving bodies suspended in the “air” save for the trail of silver bubbles blowing out of the regulators. One of our dive buddies was running low on air and we were forced to pull the dive earlier than I would have liked. I had a pretty gnarly headache after a day full of diving however and was looking forward to a beer and some rest.

The night melted into the following day — our last day of diving, with two plunges into the fabled Stetson Bank, closer to the shore. The visibility at 7am was very poor with the rough terrain of the bank clouded in a milky mist. The wall of the bank descended into a terrifying abyss, hundreds of feet into the ocean, but the murk forced us up after nearly 30 minutes.

I declined the next dive, my head pulsing from dehydration and pressure. I took to my darkened bunk where I slept for a few hours, waking up to find us heading back to Texas.

I was exhausted by the time we made it back into Dallas City Limits. The next morning I awoke and started soaking my equipment to get the damaging salt off. Overall the Flower Gardens offers an incredible value for Texas divers. You won’t be able to do as many dives or see as many incredible sights for the money. As Layne pointed out to me, there’s no way you’d be able to do as many dives as we did in one day if you followed the conservative dive tables. I can certainly say I got my fill of diving but it’ll be hard to go back to Lake Travis after soaring through the crystal waters around the Gardens.

UPDATE: I put some even cooler photos that Layne took with his underwater camera in my Flickr folder. You can access it over on the right side column.

4 thoughts on “Diving the Flower Gardens”