Dateline: Florida. G Michael G and I set out from Dallas on Friday morning, August 3rd for Pensacola to dive the much-discussed ex-USS Oriskany wreck. We had been planning the dive — set up by Layne Hedrick as a package trip out of Tom’s Dive and Swim in Austin — for a couple of months so we were understandably a little dismayed to learn that it was on the verge of being called off due to bad weather. Restructuring our travel plans, we decided to head south on I-45 to Houston instead of traveling through Shreveport, LA on I-20. In the event of a cancellation, we could doubleback to Austin and at least squeeze in a couple of dives at Lake Travis. As it turned out, the weather agreed. The Houston route probably added an hour or two to our travel time but it was the best decision we could’ve made under the circumstances.

Traveling through the Gulf Coast is a trip. Any stereotype you have of backwoods roughnecks 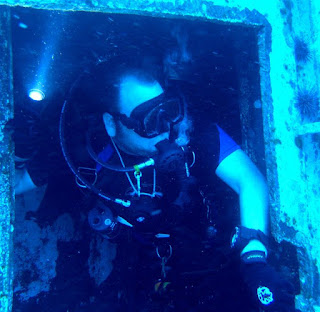 whooping it up on the bayou with their Confederate freak flag flying is 100% correct. They got a whole ‘nother way of living down there. Let’s just say that dragging a black dude behind a Chevy for kicks on a booze and hate-fueled weekend night doesn’t seem like such an unlikely scenario. And don’t get me started about the food. I like gumbo just as much as the next guy but all this fish, crawdad and shrimp frying is seriously ill. The patrons of one local joint we stopped at outside of Baton Rouge looked like they were about to collapse under the weight of so many fried boudin balls and gravy. Mike pointed out that we were, for once, the skinniest people in the room.

One pleasant surprise, however, was Mobile, Alabama. This port city with its modern skyline and quaint, antebellum-era downtown buildings made me feel as if I’d stepped onto the set of a Southern kitchen-sink drama. I’m sure the place sucks but after driving around it during a brief afternoon, I had the feeling that I’d like to visit again.

Enough of the drive. What about the dive? Our chartered boat was a catamaran called H20 Below. Captain Doug and crew couldn’t have been nicer and more laid back during our scheduled two days. We were scheduled to undertake two dives a day, utilizing the limit of two tanks per diver. Unfortunately the first dive on Saturday morning was a wee bit over-booked. The boat, which was advertised as holding 24 people, could only really do that if everyone

stood on the deck for the entire trip. As it was, with a crew of five and probably about 16 divers, we barely had any room to turn around much less put on gear.

The voyage out to the Oriskany was approximately and hour and a half. The seas off the coast of Pensacola were like glass. Our first dive was overwhelming and underwhelming at the same time. Several other boats had also dropped anchor at the dive site, flooding the zone with dozens and dozens of divers. The visibility wasn’t as much as I had hoped for and the sheer size of the 900 ft wreck and its depth — mostly beyond the recreational diving limit of 130 feet of

seawater — made it a bit of challenge to wrap my underwater senses around. The ship is oriented North to South with the stern section pointing due north. Divers on chartered boats are warned not to go below the 130 ft limit leaving 99% of them at and around the ship’s control tower which can be accessed at around 60 to 70 feet. Our second dive on Saturday was hampered by a short surface interval time causing a few divers, including both Layne and G Michael G, to fight off deco limits due to the depth of the first dive. I don’t know why I didn’t have to deal with it since I went as deep as Mike and stayed for as long.

The real gem was our second day of diving on Sunday. A smaller diving group and a smaller crew insured we had a little more elbow room on the H20 Below. With the experience of our first dive under our weight belts, we felt a little more free to explore the wreck’s terrain. Mike and I made a b-line to the deck of the ship at 130 feet. It was a great feeling to glide along the flat surface.A few stray barracuda, lots of stinging jellyfish as well as scores of spikey sea urchins dotted the metallic landscape. It was good thing we had our gloves as one wrong move could result in some serious pain. On my safety stop at the end of my first dive, I paid close attention to the flotsam in the water. I noticed that a lot of it

possessed tentacles — there were tiny jellys everywhere, hitting me in the face, arms and legs. The warm water above the thermocline felt like piss as we ascended to the surface and the globulous jellys smacking me around my lips made me feel like I’d fallen in a bowl of warm custard. Weird.

For our second Sunday dive, Mike and I were the first in the water and immediately made our way back to the deck. With no other divers to obstruct our view, it was an eerie and magnificent sight to approach the control tower from the depths. Unbeatable.

Diving the Oriskany recreationally is not cheap. As far as the cost-to-kick-assness ratio, I’d say the Flower Gardens are a much, much better deal, especially if you live in Texas. As it stands, I’d love to get my tech certifications and explore the Mighty O at depth, far from the madding strokes clinging to the command tower. There’s a lot to see and experience down there. I hope to see it some day.

Big shout out to Layne Hedrick for taking his camera into the briny blue and snapping the photos you see on this entry. You can see more photos from Layne on his website: www.liquidtravel.com.