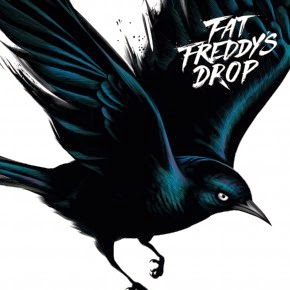 Fat Freddy’s Drop are not a band that command a lot of bandwidth in American media circles. First off, they’re from New Zealand. They rarely play the States and their 7 to 9 min song cycles aren’t what economy-minded programmers here would consider “radio friendly”. Their latest release, Blackbird actually came out last summer but thanks to a pretty much complete lack of marketing on this side of the world, I only stumbled across it this past week. And I was already a fan.

I first experienced them on 2009’s Dr Boondigga and the Big BW. I’m still not sure what that title means, but what I heard was a seamless welding of electronic/dub/reggae/jazz/funk/rock/soul. That sounds really cheezy I know, but track with me here…Inspired by the past yet far from being anyone’s idea of an oldies review, Dr Boondigga had me scraping around for more. I landed on a CD copy of their debut Based on a True Story (2005) and was equally impressed.

Blackbird, isn’t so much a progression as a honing of that sound. There is no mistaking singer Dallas Tamaira‘s soulful tones. The horn section still blows sweetly, tightly and furiously, when needed. I hear some Sly Stone in there, definitely Jamaican dub influences in production and effects. Everything is gently rocking and grooving in the same sort of muted joy one might muster while driving home from work after a mellow Friday. I’ll bet even Daft Punk fans might enjoy this.