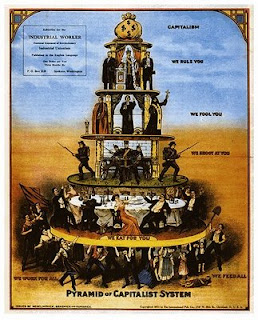 A search for info on the collapse of the current economy doesn’t turn up any definitive answers. No one can really judge it because we’re knee-deep in it. Right?

Who really knows the depth and breadth of this mess? Most can probably agree the U.S. economy has lost a prime mover — our biggest export, the consumer. Jobs have been phased out — forever? Those who still work them, squeezed for maximum efficiency.

Reasons. Reasons. Was it the hoi polloi buying houses they could ill afford? Was it predatory lenders and the siren serenade of their skyrocketing ARMs? Was it amoral speculators and foolish investors greedily gaming the system until the bank went broke? Or was it the Feds — Bush or Obama, take your pick — bailing out the billionaires — who in turn handed out bonuses to executives while the rank and file faced foreclosure…poverty…ruin? I’m just asking questions here.

I’m not really scared. What’s the worst that could happen? Riots? Famine? Mass executions? Disease? Or maybe we’ll skip all that and head straight to a new Utopian society. Could the religious folks be right? Will Jesus call his faithful to heaven before unleashing a Great Tribulation? Or maybe he’ll return but just leave everybody here to deal with it on their own? Maybe there’s no such thing as Jesus? Maybe there’s no such thing as God. Or gods. Or maybe this is all cyclical. Maybe Capitalism is the wrong way? I’m just asking questions.

I live in Texas. I read that we’ve weathered some of the storm a bit better than most. I don’t know. I do know of some good people who went jobless or underemployed thru lean times recently. I actually know a lot of people like that. Right here. But I also know people who go out every night and get fat on food and wine. I know good people who’ve gotten ill and wicked people who’ve prospered. But who’s to say who’s good and who is bad? What moral compass can we agree on? Maybe the world we’ve lived in the past 20 years is a rotten one and it needed to go. You can’t have a revolution — or an omlette —  without breaking a few eggs, I hear. Or maybe the past 20 years was our civilization’s Golden Age. A period to be commemorated by poets. I’m just asking.

I don’t pretend to know and I can’t tell you. We can have a conversation over a few beers and talk it over, but I’m pretty sure you’ll forget about it the next day. It’s just something I’ve been thinking about lately. In an apocalyptic mood I suppose but most of my friends call me a pessimist to begin with. I always say, ‘I’m not a pessimist, I’m a realist’. I sure hope I’m wrong right now but things aren’t looking so good for the old system — but I genuinely believe that this is for the best of all. We’re heading into uncharted waters. Stay limber.