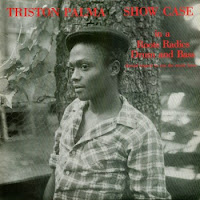 There is a ton of unsung talent in Jamaican music history. And tons of artists who intially hit big and never really fully realized their commercial potential in the international music community. I wouldn’t call the high-tenored Triston Palma (or Tristan Palmer as he is sometimes known) a “one-hit wonder.” The guy’s too good for that label. His biggest and most well-known chune being the incredible Jah Thomas-penned and produced “Entertainment” which became an anthem for the contemporary dancehall set in JA back in ’81. The record still sounds awesome. Despite it’s specific lyrical content, it has aged very well. It’s actually timeless. Its hypnotic two note riff sharing space with a soulful vocal and the occasional stab of melodic brass here and there just to keep it all interesting. Classic. Triston also recorded an amazing album with the Roots Radics (also produced by Thomas) around the same time titled, quite appropriately, TRISTON PALMA SHOW CASE ON A ROOTS RADICS DRUM AND BASS SPECIAL REQUEST TO THE MUSIC LOVER (whew). It’s fantastic. I particularly like the track “Sandra.” Lots of tight dub courtesy of the Radics’ bassist Flabba Holt.