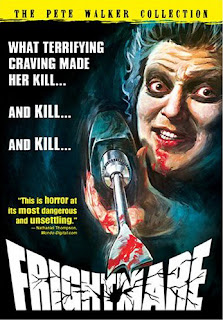 Call me a glutton for punishment, but the allure of finding the ultimate “creepy horror movie” has led me down some pretty dodgy paths. Hearing that Pete Walker‘s “Frightmare” was a unique, English take on the grisly powertool murder films of the ’70s, ala “Texas Chainsaw Massacre,” well…I just had to check it out. After all, this movie was produced at the height of the creepiest part of the ’70s…THE decade of creep. And yes, all of that era’s polyester and shag is in full effect here. Bad haircuts, smoking everywhere — you can almost smell the Pall Malls — and a bucktooth British dollybird in the form of Ms Fairfax. But, alas, those are about the only good points in this rather pointless affair concerning a family of deranged cannibals (are there any other kind?) who mack out on any losers who happen to cross their path — and being a relation doesn’t give you immunity from ending up as part of the main course. The “shock” ending is pretty cool although the trailer totally gives it away! The scratchy print from Media Blasters is servicable. At least its anamorphic. But don’t take my word for it, dig in for yourself if you’re looking for a downer of an evening at home alone (nobody is gonna watch this moldy, old flick with you).