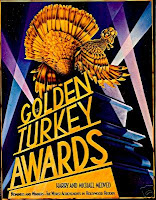 It’s Thanksgiving. People are traveling long distances to be together. Most are thinking about dinner. Turkey dinner seems to be pretty much the most traditional type of dinner. Nothing wrong with that, I suppose. It just got me thinking about a different kind of Turkey.

Recently, I was the winning bidder in an eBay auction for a vinyl copy of The Golden Turkey Album — a collection of songs from trashy ’50s and ’60s low budget exploitation films. The album came with a copy of the book that inspired it, The Golden Turkey Awards (1980) along with its sequel, Son of Golden Turkey Awards (1986). It was interesting to go through them again, however briefly. Basically, these books and Psychotronic were the resources that sparked a curiosity inside my young mind concerning crude exploitation “shockers” such as Blackenstein, Plan 9 From Outer Space, Norman Mailer’s Wild 90 and the career of Sonny Tufts. I thought it was funny to read author Michael Medved tear those schlock movie producers another one in page after illustrated page of ripping prose.

Funny, cause after all these years, The Golden Turkey Awards seems a bit too authoritarian for my tastes . The vein of humor that the Medveds frequently mine, unfairly slings mudballs at the few radical pioneers the medium has coughed up. The Medveds tear apart dreamers such as Ed Wood Jr., H.G. Lewis and lamely decry non-narrative film structures, such as Last Year at Marienbad (1963), as an example of the height of social decadence. Indeed Michael Medved’s current reputation these days lies, not in his knowledge of Hollywood’s sordid history, but as a right wing spokesman and champion of conservative social mores derived from that same history.

If you believe the tone of Golden Turkey Awards, for Michael Medved, a low budget dreamer with a movie camera and friends willing to act out a fantasy to make that dream come true is a toad. An effete, America-hater, who might as well be making plans with his politburo butt boys AT THIS VERY MOMENT to teach about the joys of homosexuality in public schools. For Michael Medved, Phil Tucker’s Robot Monster is a sign that the art terrorists have won. Michael Medved says that it’s Hollywood vs. America — and make no mistake, he might be right about that…but the point is that he sure ain’t right about Plan 9 from Outer Space, or Robot Monster or Ray Dennis Steckler. These films and filmmakers are so far out of the mainstream that kicking them is like kicking a man when he’s down…or hitting a guy with glasses. It’s in poor taste and is just plain un-American.