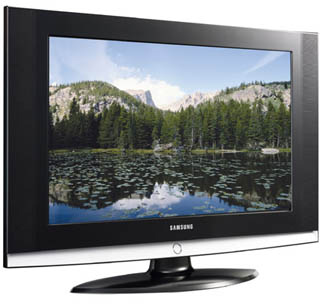 Flat-screened televisions have made an incredible leap into the mainstream this year thanks to plummeting prices and the growing awareness of the free HDTV programming which is broadcast over the airwaves in many major metropolitan regions. So, like many Americans, I decided to take the plunge and “get wet” this season. After a few weeks of research and shopping around, I found an incredible deal on a 40″ Samsung. I had initially decided to get my TV at one of the “big box” merchandisers like Best Buy, after all, if anything went wrong, I could easily return it for a refund. But after doing some reading, I decided to order from the online company Vanns.com. They even threw in a brand new Panasonic S52K, upconverting DVD player with the fancy new digital HDMI output (which shipped separately and I have yet to receive as of this writing).

While 1080p may be all the rage, I decided that the extra $500 just wasn’t worth it and opted for a television with 768 lines of progressive resolution. Now, for you out there who don’t necessarily know what I’m talking about, the lines of resolution in a standard cathode ray tube (CRT) TV are 480 (this is also the same amount of lines of resolution output in consumer DVD players). The television I purchased is capable of 768 lines of progressive resolution, but it’s otherwise known as a 720p. I’ll delve into this topic more in another post.

I got a call from the delivery company who informed me that the package had arrived. It took me about 20 minutes to get to my house from my job, but the driver told me he was paid hourly and didn’t mind waiting. He wheeled the HUGE box up into the house and we opened it, plugged the TV in and checked it out. Not a scratch, no apparent stuck pixels (yet) and the 40″ screen, which I thought might not be big enough, looked almost too big for our living room. Fantastic!

A trip to Radio Shack enabled me to pick up some component cables and antenna. By the time I got home, I was almost overwhelmed by my task — taming this large, LCD beast. I spent the better part of the evening pushing, poking and tweaking almost every button on the remote. The owner’s manual was pretty useless, but in very little time I had most of the basics figured out. DVDs, played back through the component cables, looked absolutely breathtaking, even in Standard Definition. I saw details in disks I had seen several times, such as the great new “Beyond the Valley of the Dolls” release. You could see the pores on actors’ skin. The new Twilight Zone DVDs I recently purchased looked great. I really felt like I was seeing these episodes for the first time — although, I must say, these new disks are outstanding transfers. The sound on the Samsung was surprisingly full-bodied as well. I found that the fake “TruSurround” mode turned out to be the best, without it, the audio was tinny and flat.

Over the air HDTV looked awesome when the show was actually created for HD broadcast. Shows like “Grey’s Anatomy” and “Ugly Betty” filled up the 16:9 widescreen and looked super even centimeters away from the screen. Other programming, even when broadcast digitally, didn’t look as good. The local PBS station’s signal was clear but marred by artifacting and pixelization. Lots of Spanish language programming broadcast in a stingy 480. Looked about the same as what you’d see anywhere else, although the Spanish language programming featured a lot more half-naked ladies. Come on CBS, NBC, FOX and ABC! Get with the program!

The worst however was my poor Direct TV box. The Hi Def LCD screen really brought out the worst in D*TV’s compressed signal. A tiny square box sat in the middle of the spacious 40″ screen with more artifacting than any YouTube video I’ve ever seen. Almost unwatchable. I tried hooking it up through the coax and finally the S-Video input. Both looked about the same. I guess I’m going to have to spring for that HD Direct TV box…although with the paltry amount of HD programming available, I’m in no hurry.

One area which I feel my new television fails is in the area of color. No matter how much tweaking, I had a hard time getting rid of the dreaded “red push”. Skin tones on Europeans tended toward the rosy. My only recourse was to reduce the color saturation which results in a slightly ashen picture. Again, it’s not unbearable, just a little annoying. Otherwise, I was more than happy with the amount and quality of dark hues and blacks — something LCDs (especially the cheaper models) are notorious for lacking.