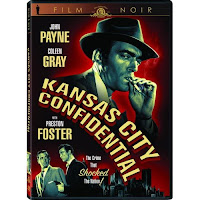 Let us now turn our attention to all things NOIR…Got my mitts on a brand-spanking new DVD of the recently released B-programmer Kansas City Confidential. Unfortunately, this rough little gem has been languishing in public domain hell for the past several years, available only in poor-quality DVDs from such dodgy distributors such as Alpha Video and Treeline. I already own two, unwatchable copies so I was really excited when I learned that MGM was gonna put out a re-mastered version. And what a difference that makes! I first caught KCC on a late-night UHF station about a decade ago. It was late, I was tired but the hard-boiled dialog, awesome cast of heavies (including Jack Elam, Lee Van Cleef and Neville Brand) and atmospheric photography kept me watching until 4 AM. The MGM DVD is bare bones but the sharp picture makes you feel like you’re at the very first screening. Totally implausible and unconnected with reality — KCC is a fun film thanks to its pulpish unpretentiousness and second-hand style. Not the best of the noirs but definitely worth a look thanks to the new pristine DVD release.