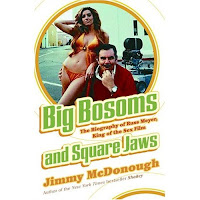 Lately I’ve been reading “Big Bosoms and Square Jaws: The Biography of Russ Meyer”. Anyone who’s known me the past 15 years knows that I’m a big Russ Meyer fan. Or at least I was a big Russ Meyer fan. I’d believed I’d out-grown the man’s work — the last time I’d tried to watch any of his films, I thought they were pretty lame.

But reading the bio has whetted my appetite and sparked a re-appraisal — my first since the great man’s death a couple of years back. And it’s especially timely seeing as the two-disc “Beyond the Valley of the Dolls” DVD hit stores last month (stop what you’re doing and go out and get it now). The book is understandably critical of a large part of Meyer’s output — taking him to task for his tedious series of “nudie cuties” from the early ’60s as well as his later output such as 1976’s hateful “Up!” — a movie I’ve never been able to sit all the way through — although I’ve always thought Meyer’s last real film, 1979’s “Beneath the Valley of the Ultravixens,” was one of his best. Going through my collection, I’ve really enjoyed

“Faster Pussycat, Kill, Kill,” one of Russ’s two masterpieces (The other being “Beyond the Valley of the Dolls”), “Common Law Cabin” and “Mondo Topless,” which might be Meyer’s strangest work ever — and that’s saying a lot. “Vixen”

starring the unforgetable Erica Gavin, is another favorite. A movie whose hero is a philandering, lesbian, incestual racist — who also happens to be an All-American girl(I’m paraphrasing star Gavin here, who, btw, looks more like NPR’s Terry Gross these days than the luscious ingenue of the late 60s). Now if only Russ’s estate could be convinced to release remastered DVDs with extras here in America!