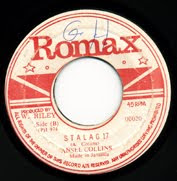 Keyboardist Ansel Collins wrote and recorded the durable instrumental, “Stalag 17” for producer Winston Riley in 1973. The track went on to become one of the most sampled and versioned riddims in the history of Jamaican music. There have literally been hundreds of different songs using Collins’ unique Stalag bass and drum riff, probably the biggest being Tenor Saw‘s “Ring the Alarm” in 1985, although it’s been pointed out that Sister Nancy scored an influential hit in the early ’80s with “Bam Bam” that was based on the Stalag rhythm.

I think that the Stalag rhythm, with it’s opening horn blast, a cacaphonous and dissonant one, is one of the more musically complex in the Jamaican idiom. It’s sophisticated interlocking of syncopated bass and drum has more than a little in common with late ’60s – early ’70s James Brown, in other words, funk. The hypnotic appeal of this rhythm is undeniable. One of the most important artifacts from Jamaican music.