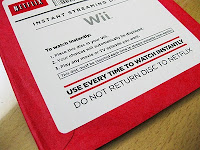 I received the new Netflix Instant Streaming disc for the Wii this past Friday. After fussing with the wireless network security for an hour or two, I managed to get it going. I had some hopes for it, even if the Wii doesn’t support hi-def video. Hey, I don’t even have the Wii hooked up through the component inputs on the TV! Regardless, I think Netflix streaming video far surpasses my expectations. When I showed Holly’s mom, she even asked if it was legal. If you have to question something’s legality, it’s got to be pretty darn good!

Now the picture isn’t perfect but most of the times it is more than acceptable, just south of standard def cable — and its all being transmitted via my wireless router (actually, if one were to hook up the Ethernet to USB port on the Wii, I’m sure you could get an improved picture). A few of the programs I dialed up were even enhanced for 16:9. All one does is insert the special disc (supplied for free by Netflix) into the Wii and navigate to the video categories. Users can add movies to their instant queue on Netflix.com. After picking your program with the Wii controller, you wait a few moments while it downloads the stream and voila. Viewers can pause, return to the main menu, browse and resume programs all with the Wii controller. Netflix also streams films unavailable on DVD here in the US, such as Joseph Losey‘s The Go-Between. I found myself enjoying all the great documentaries including the Up Series. If you are a Netflix user and you have a Wii, do yourself a favor and get on board this free service. It’s a no-brainer.