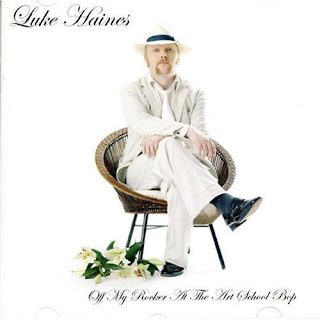 I spent part of the weekend catching up on some listening. I’m talking about music here. I bought the new Luke Haines album, the amusingly titled Off My Rocker at the Art School Bop, a couple of weeks ago but didn’t really give it more than a cursory listen. Dug in a little deeper…wow…what a great album. Haines is one of those artists whose work functions on an onion-like level…you can peel away layer after layer and its so good it might even make you cry. Surely a “difficult” artist of the highest caliber, good old Luke may be an acquired taste but one worth acquiring. I’ve included a couple of mp3s below for your amusement and edification. The album, unfortunately, hasn’t been released in the States as of this writing but you should be able to get if off iTunes or Amazon.

On another note, checked out the new movie, Children of Men. Pretty good. Not the best sci fi I’ve ever seen, but one of the more visually convincing. Some plots holes to go around but the photography, effects and acting are first rate with a satisfying ending. At least it was satisfying to me. Your mileage may vary.

Also, today marks the first time since 1992 that I’ve had a full set of choppers. That’s right, I finally got my porcelain crown cemented on my molar. I had a root canal in Brooklyn at the tail end of 2005 but due to financial issues, wasn’t able to get the actual crown till this month.