Unseasonably cold weather ripped through Austin, Texas during the third day of this year’s SXSW fest. It was the first I’d ever planned on attending in 13 years. Last time I was there in 1997, hawking my own music project and spacing out to the sounds of Wayne Coyne and Friends’ insane Parking Garage Experiment. I had only been once before that, 20 years ago in college when the fest was just getting on its hind legs. I heard word that it was packed out this year — maybe more than ever —  hmmm, maybe the cold weather would reduce the multitude into a mere ‘tude. I’m not much of a “crowds” person, but I wanted to get a glimpse of some music trends, y’know, find out what all the fuss was about — even if for only one day of a four day event, windchill factor be damned.

Bill Pearis and Chris AllenCombined with the colder clime,  a sickly, flu-like feeling was creeping up the back of my throat, creating a sense of curious discombobulation as I set out from Dallas in the Subaru at 9:00 AM Saturday morning in the pouring rain. My goal was to pull into the Capital around noon, check in with my friend Chris Allen who was putting me up for the night, and then get my arse into the totally free Brooklyn Vegan/M for Montreal Day Party since I didn’t have an official wrist band. My friend, Brooklyn-based blogger Bill Pearis was in town and helping promote the event. I knew if I hung around him long enough, I’d get a peek at some of the buzzier up-and-coming acts in town.

Roky Erickson and Okkervil RiverThe Brooklyn Vegan shindig was cool. Literally, with half the acts playing in a windy tent out in the courtyard in 40 degree F weather — it was a little rough going at times. Among the guest artists was psychedelic legend Roky Erickson, running through some pretty loose versions of his oldies — and apparently — newies with local heroes Okkervil River. Media irritant Nardwuar was on hand as compere. The chill was enough to send me into the densely thronged pocket of skinny-jeanned hipsters seeking some non-ironic warmth. Who  won a pair of designer jeans in the raffle?

Local NativesInside off 6th St, it was much warmer, but more packed out. Insiders included Canuck sonic psychos Duchess Says, Plants and Animals and Silverlake’s percusive Local Natives who got the crowd going with a Talking Heads cover. All three were pretty good though.  A friend said Plants and Animals sounds too much like Pearl Jam. I dunno…Outside we had Andrew W.K. who amused with a melodic ode to small dogs. I guess the song was called “Small Dogs.” Somebody help me here. After several beers, and some back and forth inside and outside, the party wound down  around 4 or 5 ish. Correct me if I’m wrong. Bill suggested a showcase in basement of a wine bar around the corner.  I was dying from exposure, it was time to get going. 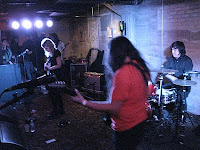 Best Coast
We headed over to the Wine Dive at San Jacinto and 3rd and talked our way in. There were free drinks, some free snacks (fried chicken legs that were, I might add, truly appetizers) and not too many folks. Nice.  Noisepop fans probably won’t go wrong with LA-based blog favorites  Best Coast. Their sound is reverb-heavy surf rock tweaked out with singer Bethany Cosentino‘s contemporary uber-indie vocal stylings. I liked it. I was tempted to pick up a 7″ vinyl single but I didn’t want to have to carry it around for the rest of the evening. I was traveling light Saturday, but I might look it up later. Abe Vigoda were also on tap, with a pleasant enough sometimes-synthy start-stop rock snarll…good, but I’ll pass.  Both bands were on their six or seventh gig a piece at the fest. I was worn out after just walking around and drinking beers for a few hours. I couldn’t imagine. Anyway, after a few drinks we decided to head out into the wilds of downtown Austin yet again. 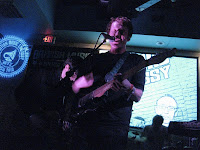 Uninhabitable Mansions
Up the street at Latitude, we had Brooklyn combo, Uninhabitable Mansions, first on the bill at the Moshi Moshi Records showcase.  They were a bit more traditional than some of the other bands we had seen up to that point in that they actually included a bass guitar player in their line-up. I really don’t remember that much about them (I think I had my first shot of whiskey at this point), but I did talk to the singer and drummer outside before the show and they seemed like very nice, very fashionable folks.  By this time, night was drawing upon us and Bill had in mind another venue…