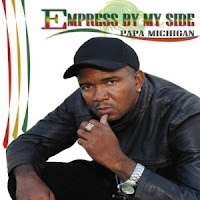 PAPA MICHIGAN
Empress By My Side
2011 – Rashanco Music

Foundation artiste Papa “Baddingo” Michigan teased fans with the release of “Woman I Love You” earlier this year. The track boasted a vocal on top the vintage “Johnny Too Bad” riddim and reflected a lovers side to the legendary Jamaican deejay — one half of the immortal Michigan & Smiley. He follows up that promise with a new full-length CD, Empress By My Side, his third solo endeavor. You wouldn’t really call it a “concept album”, but there seems to be a central lyrical concern in the first half of Empress revolving around that subject. Lovers Rock? Maybe. Michi addresses it in the liner notes so it’s obviously an intentional artistic decision. He dips further into the classic reggae songbook with a ska version of Jimmy Cliff’s “Many Rivers To Cross” and comes up with a track that could’ve fit snugly into a Johnny Nash LP. The latter half of the release features more reality content than Lovers material with appearances by Luciano and Mikey Spice for good measure. I walked into a record store recently (what are they?) and heard them playing a track off this CD. It made my day. Nice to hear the legends grow musically and Papa continues to impress — or is that Empress?