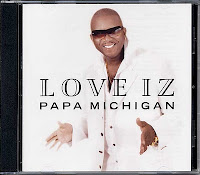 I’m a huge fan of Jamaican deejay duo Michigan and Smiley and I’m proud to say that Papa Michigan (aka Baddingo aka Anthony Fairclough) has recently dropped a first class new solo album called Love Iz.
M&S were the foundation rub-a-dub team (and first duo) coming up around ’78, ’79 when Papa Michie and the Original General were still in their youthman years. They rode rough on a clutch of souped-up Studio One rhythms overseen by the man himself, Coxsone Dodd. If you haven’t heard Rub-a-Dub Style (Studio One) you should probably stop what you’re doing and get it. Copies seem to be as rare as hen’s teeth these days but I recommend starting on Ebay. Highly recommended  — as are M&S other LPs, particularly the rootsy Downpression and Step By Step, both with instrumental backing by the Roots Radics at the peak of their powers.
Sonicly, Love Iz is about as far away from Rub-a-Dub Style as one can get. Michigan has adopted a more rapid and edgier vocal style in the past several years and his music has been updated and sounds rock solid. The opener, “Yutes of Today,” just as on Rub-a-Dub, however, reaches back into the past for its rhythmic base, in this case the classic “Declaration of Rights” riddim. There are also departures into a more, mainstream R&B sound on several numbers, particularly “Work it Up” and “Husla.” Michigan, who produced the bulk of the album, displays an excellent delivery and flow and a surprisingly strong singing voice here. The legendary deejay has given us a fresh set of killer tunes that maintain his trademark social conscience, positive outlook and spirituality — but he’s also not afraid to “Light Up” and let loose which is what makes Papa Michigan so much fun to listen to. You can tell you’re listening to a guy who’s making music and having a blast doing it. Look out for guest appearances by Al Campbell, Luciano, Tarrus Riley and Hopeton Lindo among others. Oh yeah, it’s also got the anthemic “Barack Obama” on it. If I were President, I’d make it the new “Hail to the Chief.”  Pick it up at ebreggae.com or download at Amazon.com.