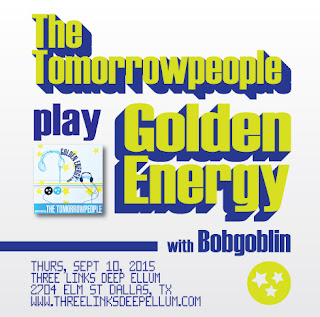 My rock and roll combo Tomorrowpeople will be reuniting for a soulful romp thru the back pages of our voluminous catalog on Sept 10 at Three Links Deep Ellum. This time around we’re attacking our 1997 debut, Golden Energy.
For this show we’re featuring vocalist, guitarist and keyboardist Gordon Michael Gibson. On guitar and vocals is Gary Parks, with bass chores handled by the ever-able Hayes Smith.
A couple of new recruits: fresh outta Boston, the amazing Chloe May Coco on vocals and keys, and the multi-faceted Ethan Berman (of noted Butthole Surfers tribute band Sweatloaf) on drums. Of course I’ll be up there picking and grinning.
Thurs, Sept 10, 2015 at the Three Links club in Deep Ellum, Dallas. Across the street from Trees. We’re opening up for Bobgoblin who are having a record release party so I believe we’ll go on a little after 9pm or so.