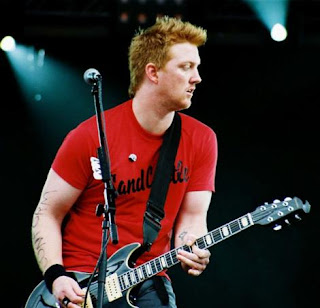 Had a fun-filled weekend that left me more than a little exhausted. Visited a bunch of places here in town that I’ve never been to before…

First off, Friday, after another late night at work, I trekked out to Gilley’s in the Cedars section to check out my friend Ian Bjornstad who was playing with San Francisco’s John Vanderslice. John is a pretty charismatic frontman whose songs are poppy slices of paranoia. I can’t say I’ve ever been a big fan but after checking out the show, I don’t know why not. The group finished off “unplugged” on the veranda of the club’s upper deck. It was pretty cool hearing the ethereal vocals of John, his band and several hardcore fans drift into the night. Strangely enough, Wilco were playing the same night in the same venue downstairs which created some frustrating traffic problems. I like Wilco a lot but I’ve already seen them a few times and didn’t feel like shelling out the dough. I really only wanted to hang with Ian for a few minutes and ended up squeezing in a pretty satisfying show. North Carolina’s The Bowerbirds opened the show. They were totally original and great. Check ’em out

Saturday evening I met up with my old friend Julie Wade and some of her friends for a blitz through the gallery scene. It was gallery night in Dallas and we hit the Dallas Design District — mainly to imbibe free alcohol (at least that seemed to be the objective of Julie and me). Ran into Richard Ross, and interesting Dallas artist who I used to play shows with back in the day. He was also the original bass guitar player for Brutal Juice. His work seemed to attract a lot of attention and deservedly so. More power to him. Ended up the evening in Deep Ellum. Todd Ramsell, Ean Schuessler and I walked to a glam rock party at Pawn Gallery. After several beers and a few glasses of wine, I actually danced to several songs. I don’t think I made it to bed until 6am the next morning.

Sunday night, Dirty Cha Cha scored some free tickets to the Queens of the Stone Age at the new Dallas House of Blues. I had never been to the venue before but it was pretty much what I expected — a bunch of corporate Nazi security guards pushing people around. And the price of the beers made the free tickets more of a push than anything. In all fairness, the bar staff were actually pretty cool and the show was awesome…made better by a GREAT sound system. I noted to Cha Cha that QOTSA lacked dynamics — they pretty much go from loud to louder. She responded with a hearty ‘Hell Yeah.’ I guess that’s what she likes. Opener Dax Riggs was pretty good too — he of the Southern Gothic hard blues-influenced style. I ended up buying an expensive QOTSA T-shirt. A few drinks at Lakewood Landing helped round out the evening before I headed home. I’m tired, but with a great weekend like this, who’s complaining?