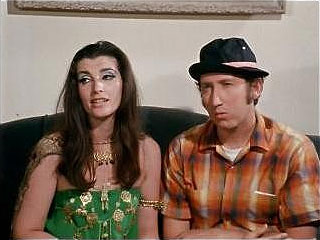 Media Blasters recently packaged together all of their Ray Dennis Steckler DVD releases into two box sets unimaginatively titled Midnight Movies 1 and 2. The sets’ price point ($13 from Deep Discount) was enough to make me double dip on a couple of previously owned titles and finally allowed me to watch, for the first time, some of the notorious filmmakers more obscure offerings. Highly recommended.

Most people know Steckler’s work from Mystery Science Theater 3000 which riffed on his 1964 opus, The Incredibly Strange Creatures Who Stopped Living and Became Mixed-Up Zombies to produce one of the series’ most hilarious and memorable episodes.

But cinematographer turned director Steckler didn’t stop with that weird and wonderful film (billed as the world’s first monster musical!). His output officially stretched out into the late ’80s with talk of more in the near future.

Steckler’s films are peopled with ugly characters, outlandish plots and situations, bad music, poor photography and a stomach-turning gloss of sleaze. In other words — they are totally awesome. His filmography ranges in style from the relatively straight-ahead exploitation of ’65’s The Thrill Killers, to the lurid, dreamlike world of The Las Vegas Serial Killer (1986).

Of the two sets, I think that I like volume 2 the best. 1971’s Blood Shack (AKA The Chooper) is a masterpiece of minimalist desperation. At this point, Steckler had all but abandoned sound recording and any form of character development. The film’s players stumble around mouthing repetitious dialog and approximately half the 70 minute duration is devoted to stock footage of a local rodeo. Best film of 1971.

In contrast, 1969’s Body Fever (the titles on the DVD refer to this movie as Super Cool), is possibly Steckler’s last attempt for any sort of mainstream legitimacy. Some shots almost resemble an actual movie. Ray himself plays sneaker-soled private dick “Charlie Smith” whose hard-boiled cracks (“I like a funky broad who lets ya know what a really rotten night’s sleep she’s had.”) are no match for the films inane plot. We even get a spicy, psychedelic love scene from the man and his mannish, yet oddly attractive real life wife and regular Carolyn Brandt. Yowza.

By 1979’s The Hollywood Strangler Meets the Skid Row Slasher, Steckler’s work began to bear a striking resemblance to snuff films. Scene after scene plods by with no purpose other than to show the two title characters hacking and stabing their victims. It’s 1986 follow-up, The Las Vegas Serial Killer, is perhaps the nadir of Steckler’s “mainstream” (ie non-porno) films. Mark E. Smith look-a-like Pierre Agostino is filmed walking on various streets in the city, strangling young girls while two creeps shadow him, spouting cliches (“Blondes have more fun,” “They make everything bigger in Texas”) and robbing random women. All the dialog is overdubbed, but it doesn’t matter. Nothing makes sense. There are a couple of inserted scenes of a strip show (maybe cuttings from Steckler’s other work) and a soundtrack that sounds like it was lifted straight from a ’60s era Doris Wishman shocker. It also features extensive footage from a local rodeo. I like it. Grade: B+

The transfers on the DVDs are excellent considering the source and look great on my 40″ Samsung LCD. I’m currently addicted to Blood Shack and never fail to laugh while watching it. Buy this and watch it or else you’re a hopeless square.