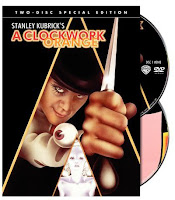 Ouch! I can’t believe I haven’t written about the new Stanley Kubrick remastered DVDs which came out a couple of weeks ago. I opted out of buying the set, picking up the two-disc versions of The Shining and A Clockwork Orange instead — both in new ANAMORPHIC DVD transfers! And after all this time we’d been hearing that Kubrick’s estate would never allow his films to be released in anything but full frame. Well, after viewing both, I would say that A Clockwork Orange is an essential purchase for anyone interested in fantastical, iconic cinema. After doing an A-B test with my earlier DVD version, there is simply no comparison. The enhanced-for-widescreen TV image is enough reason alone to pick it up, but the new transfer also brings out details in the film that I had never seen before. Make-up designs on the droogs’ faces appear where I had never seen make-up before. One can actually read the print on newspapers in the film — and thusly pick up an interesting continuity error. When young Alex is incarcerated, he gives his surname as DeLarge. But the newspapers of the days, report his last name as Burgess! The commentary by Malcolm McDowell is entertaining and enlightening and while I could probably do without the second disc, it does feature an hour long documentary on McDowell’s career which is chock full of film clips and hilarious interviews with the man himself. Interestingly, the same doc is also featured on Warner’s new two-disc O Lucky Man! DVD which came out the same day as the new Kubrick set.

The Shining, one of my favorite movies of all time and probably one movie that gets increasingly better with repeated viewings, actually suffers a bit in it’s new DVD treatment. The anamorphic image manages to cut off a good bit of information on the top and bottom and the color tone and sharpness are not up to par with the previous digitally remastered version offered by Warners a few years back. The second disc is probably even more superfluous than that of ACO and the commentary track by Garrett Brown and John Baxter is fine but inessential. The new presentation made me rethink my purchase of the two-disc 2001: A Space Odyssey set mainly due to my satisfaction with the previous remastered Warner’s version (and I also owned the original letterboxed DVD which looks about as bad as the original ACO).

My biggest disappointment is the fact that Warners decided to include Full Metal Jacket and Eyes Wide Shut (unavailable currently as separate DVDs) in the remastered, enhanced set, yet left Barry Lyndon — IMHO, one of Kubrick’s more interesting films — in the cold, opting to re-release the current DVD in a new keepsake DVD case (as opposed to the previous cardboard flip-lock case). Come on, Warners! If any film would benefit from an enhanced, anamorphic DVD it’s this one…and how about Lolita while you’re at it…

For more info, check out DVDBeaver.com‘s comparison of the DVDs.