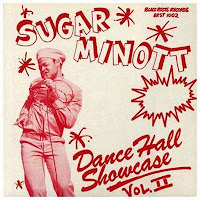 I can’t believe it’s already July… Insane. Yeah, it’s freakin’ hot here in Big D. I’ve been getting a serious office tan the past couple of months, so its not as big a deal to me as it could be. I’ve also been taking a serious detour into Jamaican music the past few months (in case you didn’t notice from the last several posts). Still on a serious kick. I’m digging deep. Way deep. I’ve pushed past my regular diet of rocksteady and early dub and waded in neckdeep into dancehall territory. I’ve been appreciating artists I never heard about a year ago. Like Winston Hussey, Rod Taylor. Susan Cadogan. Sugar Minott is almost a household name to reggae fans, but I never listened much to him until recently. Now he’s one of my favorites. His 10″ dubplate, Dance Hall Showcase Vol II is one of my favorite releases. It’s a no frills slab o’ full-on Wackie’s dub madness with some compelling vocals from Mr. Minott sprinkled on top. Serious business. Nice German repress too, if you can find it.