Zero Hour!, the inspiration for the 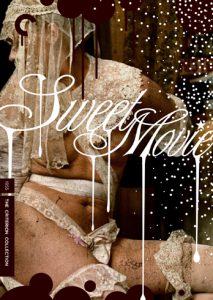 Zucker Brothers’ Airplane!, is coming out for the first time on home video in June. Now it looks like two, hard-to-find classics from the twisted mind of Serbian director Dušan Makavejev are coming out on DVD the same month. 1971’s “WR: Mysteries of the Organism” — an international film studies staple — will see it’s first official North American DVD release as well as Makavejev’s monumental “Sweet Movie” — one movie that I thought I’d never see released through mainstream channels. Both Criterion DVDs will feature new, digital transfers, interviews with the director, critical essays and improved subtitles among other cool stuff. “Sweet Movie” is one of the most uncompromising films I’ve ever seen — not for prudes or the faint of heart! But the classic score by Manos Hadjidakis is a must-hear. Look for John Vernon (Dean Wormer from “Animal House”) in the role of “Mr. Dollars.” Ground-breaking ’70s cinema.