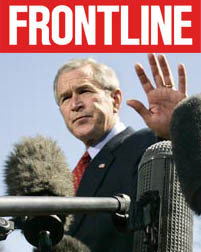 Interesting doc over on PBS’ FRONTLINE last night, Newswar, about the future of the press in America. What was interesting to me, is that here we have the same journalists, like the odious Judy Miller, who helped the Bush/Cheney regime beat the drum for war in Iraq, saying that what they reported back in 2003 was a bunch of lies. All the WMD info, reported on the front page of the NY Times — and thusly all major city newspapers — all the info of Saddam’s acquisition of aluminum tubes to create centrifuges, EVERYTHING — all lies. How many people are dead? How many of our young men? How many Iraqis? And now everyone is saying, officially, ‘Yeah, it was a lie. Too bad.’ Of course when it became apparent that no WMDs would ever be found in Iraq, the Bushites claimed that they just wanted to bring democracy to the Iraqi people. Yeah, right. Too bad most Americans don’t give a rat’s butt about any of this. I guess American Idol is on or something. Hey, that’s ok, we’re getting the world we deserve.

You can catch the Frontline episode online and be sure to check out the rest of the four-part series in the coming weeks.