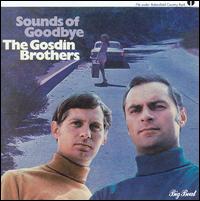 Visited my pal James “Bucks” Burnett at his haunt, Forever Young Records, in Grand Prairie last Sunday. Strange I had never been there before. Great place to pick up some really expensive but clean vinyl. I wasn’t in the mood. Picked up an Esquerita comp I’d sold back in the early ’90s but put it back. Instead I walked out with the Ace re-issue of The Gosdin Brothers‘ Sounds of Goodbye. The Gosdins were an honest-to-Gawd sibling duo from Alabama who somehow befriended The Byrds back in the mid ’60s. After backing Gene Clark on his ’67 solo debut they released their one and only album the following year. It’s a great mix of rock jangle and real country — making it, ironically, more authentic and artistically — if uncommercially — successful than anything the Byrds had been trying to do at that point in their career. As a bonus, Chris Hillman, Michael Clarke and future-Byrd-to-be Clarence White are all over this sucker. Speaking of suckers, I’m one for harmony duos and the Gosdins hit the sweet spot over and over. Totally recommended.