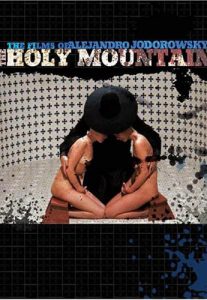 I received the Films of Alejandro Jodorowsky DVD set last week but put it away since it came the day before I left for a scuba trip to Austin. The reviews have been favorable and I was mildly amazed to see that DeepDiscount.com lists the set as their number-one best-selling DVD! Finally got around to watching it last night. I first became a fan of Jodorowsky back in the late ’80s. I was aware of his work even earlier but due to the lack of access to his films (El Topo and The Holy Mountain have been heavily bootlegged for years), I was never actually exposed to it. A foggy, late night at the Dobie in Austin back in ’89 changed all that. I took in his latest, Santa Sangre, which blew my mind. Although that film isn’t in this set, The Holy Mountain alone is worth the price of admission. Easily Jodorowsky’s best, THM is funny, scary, awe-inspiring, violent, beautiful and very ugly — all at the same time. The print and sound are incredible on this first official US video release and recommended especially to fans of David Lynch and Stanley Kubrick — although Jodorowsky out-weirds them both. Unusually artful and surrealist in their vision, Jodorowsky’s films are a breath of fresh air, offering a smart rebuttal to the small and mean-minded, modern culture though they were made nearly 40 years ago.