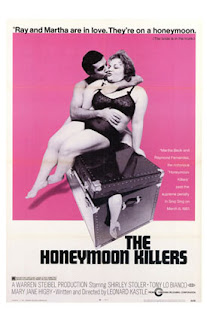 I must’ve seen The Honeymoon Killers about 15 times. It became one of my favorite films back in the early 90s. Some of my friends still quote lines from the movie. All I can say is, if you haven’t seen this gritty, ultra-low budget, true crime drama, then go out and get it this weekend. And there’s really no excuse not to since none other than the Criterion Collection released it on DVD a few years back, enhanced for widescreen TVs no less. Back in my day, we had to walk 16 miles — both ways…in the SNOW — to see this film and it was only available in a fuzzy, pan and scan VHS version. AND WE LIKED IT. The Criterion DVD is absolutely breathtaking, looking better than I’ve ever seen it. I doubt that it would look much better on the big screen to be honest. The only problem is the tinny and distorted mono soundtrack which underlines the film’s no dollar production origins. Unfortunately it also makes it hard to understand some of the dialog. Famous Frenchie director Francois Truffaut apparently used to tell people that this was one of his favorite films. Whether that’s true or not, I’m sure John Waters got a chunk of inspiration for Pink Flamingos from this.

Hollywood is mounting a “sort of” remake to this movie…at least it’s based on the same true story. Lonely Hearts will star John Travolta, James Gandolfini and SELMA HAYEK in the role of Martha Beck!!!! Unbelievable. I’ll probably wait and rent it.