This year, I plan on documenting my viewing habits with a bit more disipline than usual. With this in mind, I give you a little review of the very first film I’ve watched in the year 2007: 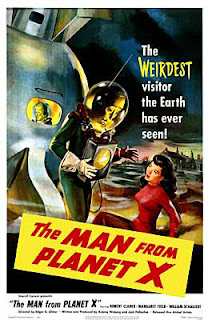 Hungarian director Ulmer has long been a fan favorite thanks to his down and dirty work in such genre pictures as the Karloff-Lugosi vehicle The Black Cat (1934) and the cartoonish noir, Detour (1945). 1951’s The Man from Planet X, regarded by many as the first film to deal with an alien invasion of Earth, is one of those movies that I’d been hearing about since I was a kid but had never seen. Thanks to a trip to the local used CD/DVD shop, I picked up a copy of MGM’s out of print, full-frame DVD for $5. The film itself is a rather hokey melodrama starring B-grade actor Robert Clarke and Margaret (mother of Sally) Field as his underage love interest. The much ballyhooed alien is nothing more than a midget in a papier mache mask with a diving helmet who speaks in musical tones and may or may not be a bad guy. Actually, he looks a little like the banjo player from Deliverance. The downbeat, ambiguous ending is pretty cool and Ulmer actually makes good use of the low budget, painted sets and miniatures. Most people would find this 50s sci fi completely useless but I enjoyed its atmosphere and the B&W MGM presentation is as crisp as can be. Now if only Detour could receive the same attention!

Interestingly, Ulmer has Dallas roots. His 1960 films, Beyond the Time Barrier and The Amazing Transparent Man were both filmed right here in town.