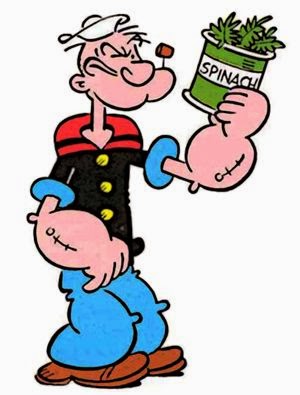 Comedic actor Eddie Deezen contributed this piece about the history of Popeye (a favorite of mine) to Neatorama (again via Bifurcated Rivets). He’s got a website as well. Although he updates about as often as I do (despite my latest, almost hopeless attempt at staying up-to-date).

“The Popeye cartoons were so popular during the Depression, sales of spinach in America increased by a third. “Popeye” Spinach is still the second largest-selling brand of spinach in america. In one cartoon, Popeye tells his nephews he is a descendant of Hercules and his ancestor originally got his strength from inhaling garlic. He gets beat up and thrown into a spinach field, and this is the “genesis” of his love (and need) for spinach.”

Now, if that don’t whet your appetite, friends, what do you want???