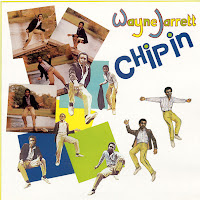 Tough Roots Radics riddims and the floating, ethereal vocal stylings of Wayne Jarrett make CHIP IN (1982) not only a classic and key entry in the Jamaican music canon but a damn fine listen to nearly 30 years on.

The Junjo Lawes production also boasts some of the worst LP art in Reggae. Maybe not worst, but certainly a nominee for most misleading. It’s a bit of the old bait and switch. Instead of the laid-back Lovers Rock — am I the only one who sees this? — hinted at by the cover montage (photos of the clean-cut Mr. Jarrett as well as rotoscoped renderings from the otherwise inspired Tony McDermott), the inside grooves are actually filled with the smokey propulsion of Flabba Holt, Style Scott and Radics at the height of their powers and a roots-flavored lyrical bent. Wayne sounds like Horace Andy at points — but only in the best possible way. Perhaps its no coincidence since Jarrett served as vocalist on some H. Andy sides such as 1977’s “In the Light.”

I approached the LP with caution. I had always enjoyed Wayne’s title single and the subsequent versions it spawned under the Volcano label. Little did I expect that the hit was actually the least interesting track on this album. Now how often does that happen? When it does, of course it’s gold and CHIP IN is an A++ stone cold classic in every sense. Highly recommended. As a snapshot of the time and as a satisfying, complete work of art. Greensleeves — or VP — have reissued the album on vinyl recently and its exciting to be able to expose more people to the richness of the early ’80s Dancehall era, Junjo & the Radics and Jamaican music in general.