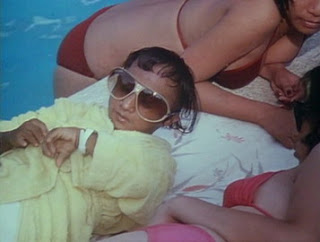 I know it’s sorta old hat by now…but the Weng Weng Rap is still funny business. I was inspired this weekend to actually transcribe the lyrics as best I could. There could be a few mistakes here and there but here goes:

Weng Weng Rap
By the Chuds

Hey, yo, he’s good to go
Hell yeah, it’s Agent Double O
Don’t want no trouble though
So you best put your weapon down slow
Keep your hands low down where he can see ‘em
Don’t put up high
He’s a tiny human being
Guaranteeing security to Filipino citizens
It’s all the same thing to Weng Weng
Guilty, innocent
He’s got his own style
He’s got a cute little smile
In fact, one time he even got picked up
By a pedophile
But kill that, he’s skilled at
The art of attack
He got a razor blade hat, a little gat
And a rocket pack
He doesn’t like booze
So never pour him a shot of scotch
Just give him a Coke
And you won’t get a pop in the crotch
His movies you love to watch
You know that they all sweet
Weng Weng is doing his thing thing
Under three feet
They say that he’s whack
That’s he’s weak
Yeah, you know what
They say that in the Philippines
You watch out for the bowl cut

You’re in the getaway car
Cause you just finished the heist
Got through the SWAT
Lots of cops
So you’re thinking you’re nice
Mastermind, genius-thief
You think you already own the title
From behind you the hear the whine
Of a mini-motorcycle
He roll up quick with two-six
Of trouble on top
He shoots a look, crooks get shook
And you could feel your heart stop
The kinda man that could chill you right thru to your soul
He shouts “Pull over to the side of the road, I’m interpol”
Best oblige, and subside
Cause if not you’re sure to die
By a bo staff to the gonads
Or a sai in your eye
Try and flip the script
If he’s outnumbered and underhanded
He’s outstanding, he could jump the Grand Canyon and land it
A mini bandit, fighting for justice, he’ll never lose
Finest barbers and tailors
You know he’s always lookin’ smooth
He’ll take you out without a doubt,
Boom bing and bang bang
My advice to criminals is
“Stay the fuck away from Weng Weng.”

Weng Weng Weng Weng 2’9
He’ll kick you in the nutsack from behind
If you think Weng Weng is coming soft or slack
Never that, never that, never that, he’s
Back on the scene it’s the man
Who just cash checks and have sex
He’s seen your mamma naked with his high tech mod specs
Burst in hotel rooms never givin’ a shit
If he sees a naked bitch, best believe she get a tender kiss
After bustin’ some heads, ya’ll could catch him at the disco
Rockin’ upskirts and clockin’ more thongs than Cisqo
Stayin’ alive is no jive, when he dance, the woman cry
They get hypnotized by his hips swayin’ side to side
These fake secret agents try to front but they get played
Weng Weng could pierce Brosnan with a katana blade
Leave you in the hospital your condition is critical,
You’re finished bro, even the doctors sound a little cynical

Eh yo, I’ll tell you what. That Weng Weng? He’s a stone-faced killer. I mean criminals ain’t got no shot against him, why even try?