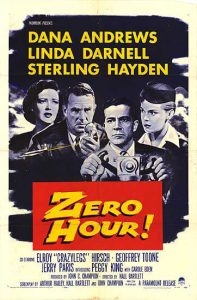 Finally, fans of the film Airplane! will be able to see the true origins of the ’80s comedy classic when Zero Hour hits stores this June. The 1957 film, starring Dana Andrews as “Ted Stryker” has never been released on home video so this DVD, part of Warner Brother’s “Camp Classics” collection, will be a real treat. My prediction: unintentional laughs galore as first time viewers hear Sterling Hayden say, “I guess I picked the wrong week to quit smoking.” The Digital Bits reports that the film, along with a bunch of other b-movies, including Attack of the 50 Ft Woman and Colossus of Rhodes (Sergio Leone’s directorial debut), will be released on June 26th.